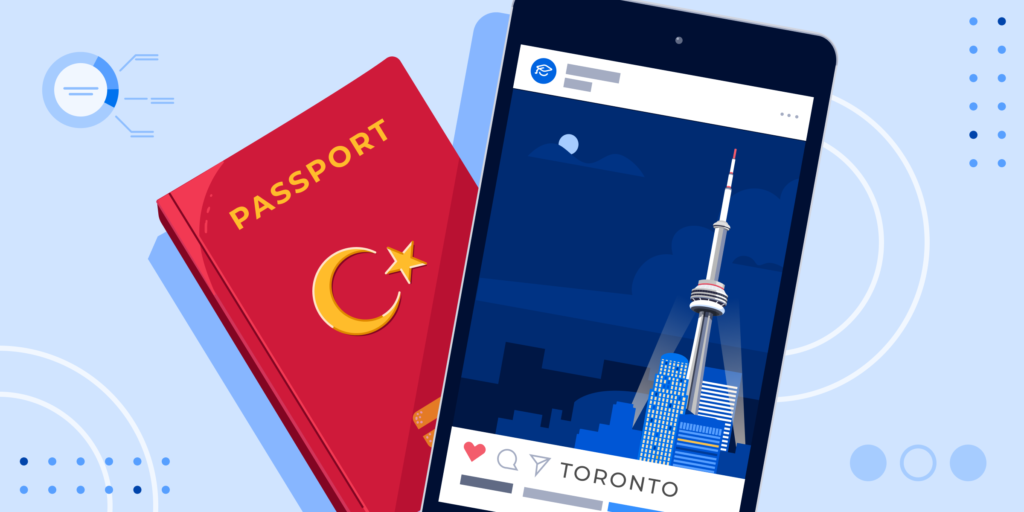 The list of countries with students who have their sights set on Canada as a study abroad destination has steadily grown over the past two decades. One nation inching its way up that list is Turkey. This year, Turkey joined Iran as the only other Middle Eastern nation in the top-15 countries ranked by study permits issued.

In this edition of ApplyInsights, I’ll be breaking down new data1 to explain student visa2 trends within the Turkish market. I’ll also talk about where Turkish students are studying in Canada, what brings them there, and how their interest is projected to shift post-pandemic.

This is the tenth article in our ApplyInsights series highlighting market-specific trends in international students attending Canadian institutions. In the past, we’ve covered India, Hong Kong, Algeria, Brazil, China, the Philippines, Bangladesh, Vietnam, and Sri Lanka and Nepal.

Several questions hovered over Turkey’s potential as a source market in Canada during the global pandemic. How would the Turkish government’s ability to contain COVID-19 affect Turkish students’ appetite to study in Canada? Was Turkey’s 2016 spike an outlier, or would interest in Canadian institutions rebound when border restrictions were lifted?

The chart below shows study permit approvals over the past five years and an estimate of where the Turkish market is headed over the next 18 months:

I expect interest in Canadian educational opportunities will continue to increase among Turkish students over the remainder of the year as international travel restrictions are lifted and vaccination rates rise.

In 2022, I predict Turkish students will be issued over 4,000 new study permits, which would cement Turkey’s place within the top 15 source markets.

While this may look like a cause for concern, local recruitment partners have assured me that this drop-off in application approval rate was a product of Turks leveraging the study permit application process as a method to kickstart the immigration process to Canada.

Already grappling with sizable poverty rates, Turkey continues to experience severe COVID-19 outbreaks. This has motivated a portion of the population to explore new ways to relocate, one of which is applying for Canadian study permits.

Given that a number of these applicants were not applying solely for the purposes of pursuing an education in Canada, an uncharacteristically high number of Turkish applicants were rejected in 2020 and 2021. It’s also worth noting that approval rates fell across all markets in 2020 as students were unable to obtain documentation and attend in-person interviews due to office closures.

We see these issues reflected in the data when Turkey is compared to the larger Middle East from 2019 to 2021:3

Interest in studying in Canada among Middle Eastern students has varied between countries considerably over the past decade. In 2016, Saudi Arabia was the top Middle Eastern source market for study permit applications, but has since declined considerably due to a deterioration in international relations between the Saudi and Canadian governments.

In a cross-market comparison for ApplyInsights earlier this year, I unpacked the key reasons Saudi students choose to study abroad and what growth looks like for that market.

The United Arab Emirates (UAE) and Jordan have aslo seen strong study permit numbers in the years leading up to the pandemic, which have since declined. Iran and Turkey have solidified their place as the two largest contributors of international students to Canada, as the table below shows:

Another flourishing country in the Middle East over the past three years is Lebanon, which looks to be a promising source market with plenty of growth potential.

As is the case with most other source countries, British Columbia and Ontario were the top two provincial destinations for Turks in every year between 2016 and 2020. While this pattern lines up with what we typically see from other markets, Turkish students’ interest in Ontario is especially high.

In 2019, 49% of all new international students were issued study permits for schools in Ontario. By comparison, nearly two-thirds of Turkish students were issued permits for Ontario institutions in the same year. This elevated interest in Ontario schools remained steady in 2020, making Turkey the source market with the highest concentration of Ontario-bound students.5

Our recruitment partners tell me that Turkish applicants typically skew younger, with 2 in 3 students being under 25-years-old in 2019. The demographic of Turks place a priority on attending school in a location that offers excitement and a rich cultural experience.

Toronto and Vancouver offer metropolitan environments that provide young students with the entertainment and social infrastructure they need to supplement their educational journeys.

Toronto is also home to the largest demographic of Turks out of any city in Canada, with Vancouver ranking second.6 Students naturally have a desire to be close to their friends and family, as well as communities that provide students with a taste of home.

Of course, Canada is much more than a two-city country. Given the culture, entertainment, and unique experiences that await students in Canadian cities like Montreal, Halifax, Calgary, and so many others, I urge schools located in these vibrant cities to showcase what they have to offer during the recruitment process of prospective Turkish students.

The charts below compare the distribution of study permits issued to Turkish students and students across all markets by study level in 2021:

College is the main draw for Turkish students to Canada. Between January and June 2021, 37% of study permits issued to Turks were for college studies—8% higher than the all-market average. Interest among Turks in Canadian colleges is trending upward, as the share of study permits issued at the college level has risen 17 percentage points since 2019.

One of the most unique trends displayed by this data is the number of Turkish students who apply for study permits to pursue language studies programs. So far in 2021, 24% of all study permits issued to Turks were for language programs. This is exceptionally higher than the all-market average of 3% and is the highest concentration of language students among the top 15 source countries so far this year.

Turkish recruitment partners tell me that one of the biggest hurdles for their prospective students who want to study in Canada is low proficiency in English.

In order to meet the student visa requirements associated with attending undergraduate or college programs in Canada, applicants need to receive an International English Language Testing System (IELTS) score of 6.0 or higher across all four categories of proficiency: reading, writing, speaking, and listening.

Most Turkish students attend language programs on the back of a conditional offer from a Canadian institution, which would grant them acceptance into their program of choice pending a passing IELTS score.

Many Turks come to Canada seeking work experience through the Post-Graduation Work Permit Program (PGWPP)—something graduates of language programs in Canada are not currently eligible for. Language programs can thus act as a springboard for Turkish students who are looking to gain work experience in their field of study and eventually pursue a pathway to permanent residency in Canada.

In a world where many people aren’t able to count on the stability of life at home, Canada offers opportunity. Prospective students in Turkey are taking full advantage of that opportunity in 2021. Recent data suggests that Turkey looks poised to reignite the growth potential that it flashed back in 2017.

Canadian institutions should take note of this recent surge in Turkish interest and work to put themselves in a competitive position moving forward. Here are my recommendations for schools looking to capture some of this growing market:

1. All data courtesy of Immigration, Refugees and Citizenship Canada (IRCC), except where noted. Statistics used in this article are for new study permits only.

2. The terms student visa and study permit are generally used interchangeably for Canadian international students. Rather than a student visa, Canada provides an approved international student with a study permit, which allows that student to enroll in classes at Canadian institutions. When a student is accepted for a study permit, they are usually also provided with a visitor visa, which allows that student to enter Canada for their studies.

261
SHARES
Share on WhatsappShare on FacebookShare on TwitterShare on Linkedin