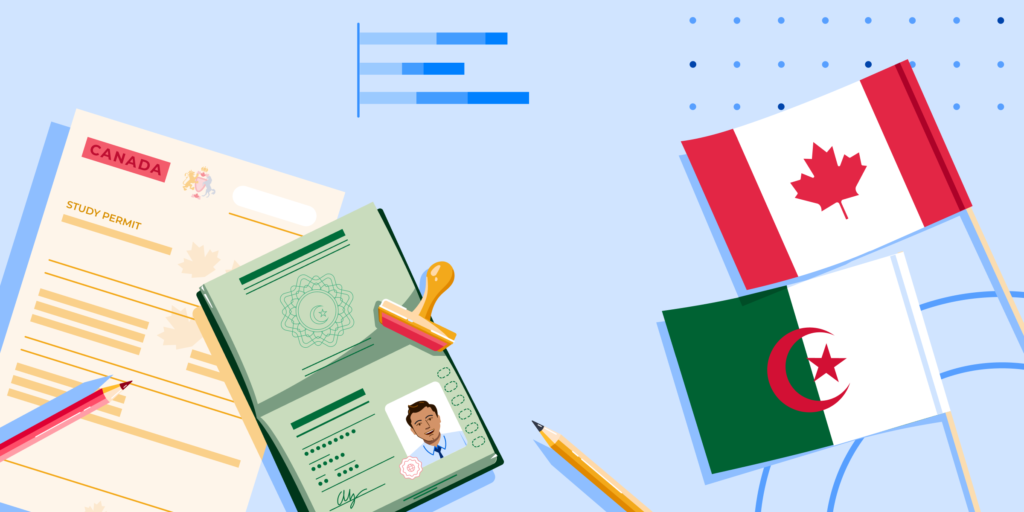 Algeria remained one of the most stable markets for Canadian institutions in 2020, in spite of the global pandemic. The number of new Canadian study permits issued to Algerian students fell 41.3% in 2020.1 However, this remained well ahead of the 73.5% all-market decline and the 62.6% decline in the Middle East and North Africa (MENA) market.

In this edition of ApplyInsights, I’ll be analyzing study permit trends for Algerian students to evaluate how the Algerian market has shifted over time. I’ll also be looking at where and what Algerian students are studying in Canada, what roadblocks are currently preventing greater market growth, and what institutions can do to target this growing market.

This is the second article in our ApplyInsights series exploring high-potential international student markets in Canada. Our first article in the series covered the growing Hong Kong market, and future installments will be available in the coming weeks.

From 2016 to 2020, the number of Algerian students applying for Canadian study permits increased by almost 400%.

The table below summarizes the year-over-year changes in the Algerian market:

Algerian students largely avoided this significant decline in study permits issued, with study permit issued-to-approved rates remaining above 85%. The chart below presents a comparison between study permits approved and issued for Algerian nationals:

This high issued rate has helped Algeria remain a growing market for Canadian institutions. In fact, 19.3% more study permits were issued to Algerian nationals in 2020 than in 2018, compared to a 70.3% decline across all markets. Algeria was the only major source market that saw growth between 2018 and 2020, as the table below shows:

Algeria was also a highly resilient market throughout the early months of the pandemic. The average year-over-year issued study permit decline for all source markets was 73.5%. By comparison, the Algerian market lost only 41.3% in 2020. This made Algeria the fourth most resilient Canadian market in 2020, behind only Hong Kong, Tunisia, and Sri Lanka.

Quebec has always been the primary Canadian destination for Algerian students. Though French is no longer an official language of Algeria, it remains widely used and understood throughout the country. This means that Algerian students are often able to avoid paying international student fees at Quebec-based institutions, making studying in Quebec significantly more affordable. These factors helped Quebec attract 2,000 Algerian students in 2019 and 1,174 Algerian students in 2020, accounting for over 95% of study permits issued to Algerian nationals in each year.

The circle charts below show the change in the distribution of study permits issued to Algerian students by study level in 2016 and 2020:

University remains the primary draw for Algerian students, who value the perceived career and financial stability associated with completing a university degree. This is why, by 2020, university students were far and away the most represented from the Algerian market. The market share of study permits issued to Algerian university students increased by 32.8% from 2016 to 2020, hitting 94.7% in 2020. Algeria had the highest proportion of university students among all major source markets in 2020.2

Many markets have shown that young adults are less likely to proceed with study abroad plans due to the pandemic. But for Algeria, the number of university study permit applicants fell only 6.7% from 2019 to 2020. The main driver of year-over-year issued study permit decline was lower acceptance rates.

The chart below shows the approval rate for post-secondary study permits for Algerian students over the past five years:

Interest in English Language Education on the Rise in Algeria

The good news for the university sector across Canada is that Algeria is likely to be a growing opportunity post-pandemic.

Many Algerians speak at least two languages, including French. From speaking with our network of partners in Algeria, there is growing interest among Algerian students in pursuing English language education abroad. By completing a degree in English, Algerian students can reinforce their multilingual skills and become more desirable employees in the workforce. As more companies expand their global presence and try to reach out to more diverse communities, the demand for multilingualism will continue to grow.

As a result of these job market factors, an increasing number of Algerian students are looking to study at English-language institutions abroad. The UK has become an especially attractive destination for Algerian nationals because of its short student visa processing times and high visa approval rates. Algerian students looking to emigrate abroad and obtain permanent residency (PR) or citizenship have also been attracted to the UK’s new two-year post-study work visa. This could pose a risk to future market growth for Canadian schools, if they aren’t proactive in promoting Canada’s Post-Graduate Work Permit Program (PGWPP) and PR pathways.

The recent announcement that Canada will offer six new pathways to permanent residency in 2021 may increase Algerian student interest long-term. This year, Canada will be accepting permanent residency applications from international students who graduated from Canadian education institutions. Though the pool for English language students will be capped at 40,000 applications, there is no such limit for bilingual or French-speaking students. This means that Algerian graduates are prime candidates for these new residency pathways. If these programs are extended, they could offer a strong opportunity for Algerian students to settle in Canada after their studies.

The Algerian French-language market is also poised for continued growth. Institutions with French-language or bilingual program offerings should look at Algeria as a present and future growth market. These institutions would also benefit from highlighting career advancement opportunities for multilingual individuals, especially in places where French-English bilingualism is more common.

685
SHARES
Share on WhatsappShare on FacebookShare on TwitterShare on Linkedin