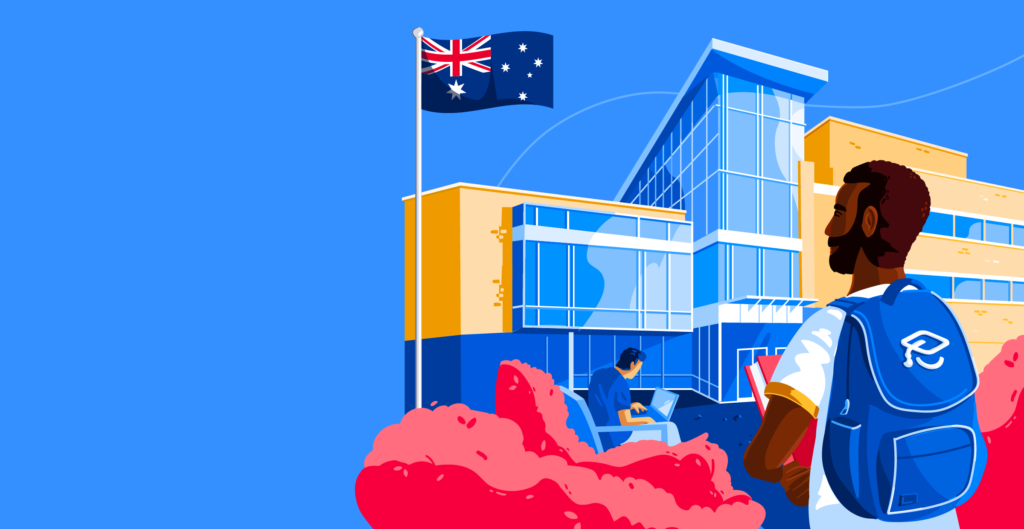 Did you know that Australia is one of the top three study abroad destinations for international students? They don’t just flock there for its incredible weather and amazing beaches—although that’s undeniably a big part of the attraction! The country also boasts some of the world’s very best universities, and is home to:

Join us for the first in a two-part blog series as we take a look at some of Australia’s top universities!

The Australian National University (ANU) is a world-leading institution in Australia’s capital city, Canberra. The university’s commitment to excellence in research and education ensures graduates are in demand the world-over and ready to tackle the complex challenges that we face today. ANU ranked an impressive #59 in the Times Higher Education (THE) World University Rankings 2021—the highest-ranking Australian university on the list!

Students will also enjoy studying at the university’s leafy campus, one of the country’s most beautiful, and home to more than 10,000 trees. Over 500 of these trees are of “exceptional significance” owing to their age, history, and/or species. The city of Canberra came in at #23 on the most recent QS Best Student Cities list, and is home to some of Australia’s top cultural and political institutions, including the National Museum of Australia.

Australia 101: Why Study Down Under

The university is located in beautiful Gold Coast, Queensland, Australia’s sixth-largest city. Students can take advantage of the city’s breathtaking beaches to swim or surf, but regardless of how you like to spend your free time, Gold Coast has something for everyone. The city is home to a number of theme parks, including Sea World, and students will never be far away from world-class golf courses, shopping, art galleries, and even the rainforest.

Central Queensland University (CQU) is one of the country’s largest and fastest-growing universities and is renowned for its international focus. CQU values and embraces its diversity, and believes in quality education for everyone, regardless of where you come from. This commitment to inclusion was reflected in The Good Universities Guide 2021, which ranked CQU #1 in Australia for social equality.

There are multiple campuses scattered across Australia, allowing students to choose from vibrant city living or a quieter locale, depending on their preference. The university’s main campus, Rockhampton, is located in Queensland. Other campuses include Townsville, Mackay, Brisbane, Bundaberg, Cairns, Gladstone, Sydney, Adelaide, Melbourne, and Perth.

Charles Sturt University (CSU) believes wholeheartedly that wisdom transforms communities. The university offers students choice and flexibility when it comes to their studies, and works hand-in-hand with industries and communities in teaching, research, and engagement. This approach has paid off. The QILT Graduate Outcomes Survey 2020 ranked CSU #1 in Australia for graduate employment and awarded the university five stars for graduate salaries.

Edith Cowan University (ECU) was named after Edith Dircksey Cowan, the first woman elected to the Australian Parliament. Cowan believed that education was the key to growth, change, and improvement in society, and the university that bears her name has taken up her mission. The university offers an array of innovative and practical courses across a variety of disciplines and is recognized for its excellence in research culture. The QILT Survey 2020 ranked ECU #1 in undergraduate teaching quality in Australia for the fifth consecutive year.

The university’s main campus is located in Joondalup, Western Australia. A suburb of Perth, students will enjoy the proximity to this incredible city, which was also included in QS’ Best Student Cities. The university’s Mount Lawley campus is a stone’s throw from Perth’s central business district. The South West (Bunbury) campus, with its state-of-the-art facilities, is a little further afield—approximately two hours from Perth.

While Federation University might be one of Australia’s oldest institutions—it has roots dating back to 1870 and celebrated its 150th anniversary last year—it’s known for its truly modern approach to education. It also has a reputation as Australia’s most progressive university. Federation ranked #1 in the country for postgraduate teaching quality in The Good Universities Guide 2021.

The university’s historic flagship campus, Mount Helen, sits on more than 250 acres of natural bushland, just 10 kilometres from Ballarat city centre. Eagle-eyed students might even spot a koala, kangaroo, or one of several types of exotic species of birds! The campus also plays host to Ballarat Technology Park, which includes tenants such as IBM. There are two additional campuses across the state of Victoria, Gippsland (in Churchill) and Berwick, as well as one in Brisbane, another high-ranking city on the QS Best Student Cities list.

Join us next week as we continue exploring some of Australia’s top universities!

Ready to study Down Under? Start exploring your study options in Australia on ApplyBoard!

217
SHARES
Share on WhatsappShare on FacebookShare on TwitterShare on Linkedin