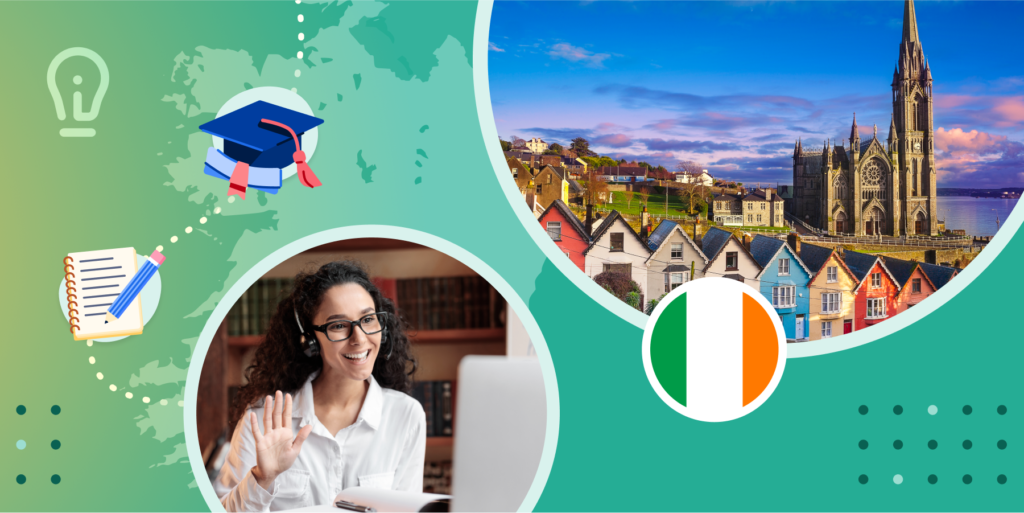 ApplyInsights is dedicated to placing a magnifying glass over the study abroad destinations that ApplyBoard helps students reach. Earlier this week, we announced the addition of Ireland as our newest destination option for students.

Today, we’re placing that magnifying glass over the higher education landscape in Ireland. While modest in size and population, Ireland ranks as the leading English-speaking study abroad destination in Europe, offers the fourth-highest standard of education in the world,1 and has a reputation for being a warm and welcoming country.

For those new to higher education in Ireland, we’ve got you covered. We’ll look back at the past decade of Irish international education, break down Ireland’s top source markets, highlight what international students in Ireland are studying, and much more.

The Evolution of Irish International Education

Over the past decade, Ireland has bloomed as a study abroad destination. The following chart tracks the number of international students studying in Ireland since 2010:

In 2010, 9,563 international students were enrolled in Irish Higher Education programs. By 2020, Ireland’s international student population had tripled, swelling to over 28,500 students. Over that time period, Ireland showed encouraging year-over-year growth, posting increased enrollment in nine out of 10 years.

Ireland was not immune to the harsh impacts of the global pandemic. 2021 marked the first year since 2012 in which Ireland’s international student population declined, falling by nearly 12%. But all signs point to a swift recovery for a market that’s shown nothing but promise in recent years.

Which markets have contributed to Ireland’s growth over the past 10 years? The following racing bar chart tracks the progression of the top 10 international source markets in Ireland from 2010 to 2021:

As we’ve observed in several other destination markets, India’s rise throughout the 2010’s was also remarkable in Ireland. In 2010, Ireland hosted just 299 Indian students, placing India seventh among source markets. In 2020, nearly 3,900 Indian students were studying at Irish institutions. That’s 12 times more than 2010.

The US, Canada, and Great Britain2 are also mainstays on these rankings. These countries have played an integral role in building the foundation of Irish international education and will continue to do so in the coming years.

Here’s what the top 15 source markets in Ireland looked like in 2021:

What study levels are piquing the interest of international students in Ireland? Let’s take a look. The chart below shows the distribution of Irish international enrollments by study level:

Within the Irish higher education sector, one out of every two international students studied at the undergraduate level last year.

This increased interest in post-graduate study in Ireland is likely driven by the additional time granted to master’s or PhD students to stay in Ireland following graduation.

Another unique option available to Irish international students is the ability to work part time while in school. Ireland permits international students to work up to 20 hours a week, which can act as a valuable supplement for all students, particularly for those who elect to pursue multiple levels of higher education.

Our first look at Irish data is a great opportunity to check in on what students are coming to Ireland to study. Let’s examine the top 10 broad fields of study for international students in Ireland in 2021:

After recovering from potential bankruptcy in 2010, Ireland expedited its economic recovery by setting a lower corporate tax rate than most other western European countries. This move attracted several tech and STEM companies which boosted the Irish economy while also creating job opportunities in these fields.

The Irish higher education sector has grown over the past decade to meet the demand created by these businesses, resulting in more students pursuing degrees in business and STEM.

Ireland has become an increasingly attractive destination for healthcare professionals due to labour shortages in the healthcare and nursing home sectors across the country.

Five of the top 10 most popular schools among international students in Ireland during 2021 are ApplyBoard partner schools.

With a 95% increase in the 85+ year old population expected by 2031, demand for staffing in all healthcare facilities will rise. This offers a prime opportunity for international students who are looking to enter a field that will have no shortage of work available in the coming years.

In December, we examined the impact of the “Double Cohort Effect”, a phenomenon describing the pent-up demand generated by students whose study abroad plans were put on hold by COVID-19, combined with students who fell into the regular cycle of applicants.

We’ve seen that effect impact the Canadian market, with international student totals climbing by 18% post-pandemic. Expect a similar rebound to take place in the Irish market.

Not only are Irish institutions likely to receive pent-up demand brought on by the pandemic, but a post-Brexit boom is also something to watch for. UK universities saw declines in applications from several European source markets last year, opening opportunities to recruit European students who are looking to study close to home.

As European students are generally no longer considered for domestic tuition fees in the UK following Brexit, many will explore alternative options.5 The number one English-speaking study abroad destination in Europe is an ideal place to start looking.

The Fall of the Euro

Another item that’s making Ireland attractive to students is affordability. The Euro’s fall in value relative to the US dollar has been substantial, falling from 1.22 USD in December 2020 to 1.05 USD in May 2022.6 This 16% decrease is the largest 2-year decline for the Euro since 2014, making studying in Ireland more affordable relative to the US than it has been in years.

As student budgets move to the front of the post-pandemic conversation, Irish institutions hold a competitive advantage in affordability over the US counterparts.

Ireland is a strong and growing market with the potential to transform the lives of many hopeful international students, who will in turn give back to the Irish economy. At ApplyBoard, we’re excited to cover this market in more detail moving forward. Keep your eyes peeled for more Irish ApplyInsights content over the next few weeks.

1. All data courtesy of the Irish Higher Education Authority (HEA), unless otherwise stated.

40
SHARES
Share on WhatsappShare on FacebookShare on TwitterShare on Linkedin