ApplyInsights: Analyzing a Record-Breaking Year for International Education in Canada 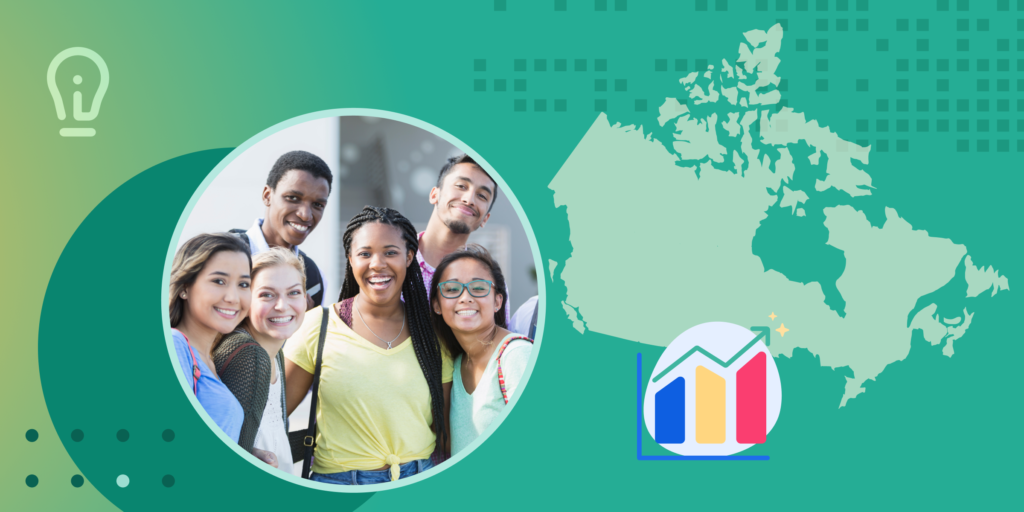 As studying abroad returns to feeling like a common endeavour, there’s a host of storylines to watch. We’ll be investigating a spike in European interest in the Canadian market, encouraging growth from Latin America, and surging numbers of students from historically popular markets like India and China.

What’s driving growth in these markets and what’s on the horizon for international education in Canada? Let’s get into it.

This represented the largest single-year decline in international students since 2000, at 17%. However, students quickly returned to studying at Canadian schools last year.

The following graph tracks the evolution of the international population in Canada over the past six years:

After the pandemic-related decline in 2020, Canada saw a prompt return to pre-pandemic levels, with the number of international students in Canada climbing by nearly 18% in 2021.

Canada’s Post Graduation Work Permit Program (PGWPP) offers international students one of the smoothest pathways to securing work in their trained field, and is likely a key driver of this growth.

This is particularly relevant given the record 330,000 study permit approvals that poured in last year. Many of these students have yet to actually begin their education. Students who want to transfer from online to in-person studies will also make the trip.

Since 2000, most European countries have shown a consistent level of interest in studying in Canada. The number of European students in Canada has fluctuated slightly but remained largely stable for the past 20 years.

In 2021, we’re seeing a surge in the number of European students coming to Canada. Last year, seven of the top 10 fastest-growing international student populations in Canada were European.2

Take a look at the growth trajectory of those seven countries over the past decade:

With the exception of Spain and Italy, which both experienced steady growth from 2010 to 2019, the other European countries on this list have shown a stable level of interest in studying in Canada.

While it’s well-documented that COVID-19 created pent-up demand for international education with students in all countries, this concentrated spike in interest across Europe looks to be a product of Brexit.

European students who previously would’ve opted to take advantage of reduced tuition fees at UK institutions are now casting their search wider, pursuing education opportunities in Canada. While several UK schools continue to offer these rates to EU students, they may be skeptical of future tuition hikes or soured by Brexit politics.

As you can see from the chart above, several European countries are expressing considerably more interest in the K-12 study level, accounting for the majority of study permits issued to German, Spanish, and Italian students last year.

When compared against the global averages, these European countries are pursuing K-12 study permits at a particularly high level. Across all countries in 2021, just under 13% of Canadian study permits were issued at the K-12 level.

Those looking to get upskilled on all study levels provided to international students in Canada, including K-12, should check out ApplyBoard’s free ABCC–Canada course.

Local recruitment partners tell us that the increasing popularity of high school study abroad programs among Europeans is a big factor contributing to the number of international students attending Canadian K-12 institutions.

When you factor in that exchange programs under six months are not counted towards this data, the actual number of international students studying at the K-12 level is likely even higher.

Looking at the raw numbers, it’s Asian countries that remain at the top of the Canadian rankings for total international students in Canada in 2021:

Asian countries accounted for six of the top seven countries in 2021 ranked by students in Canada. The sheer volume of students from countries like India, China, and South Korea is enough to vault these countries to the top of the rankings, but most of them have not fully recovered to pre-pandemic levels.

This indicates major room for growth in the short term for Asian countries. Amid rapid growth seen by several countries across Europe, Africa, and LATAM, Asia was still able to secure a large foothold in the 2021 rankings.

Looking forward, we expect the number of students from these nations to increase substantially once Asian students regain a high level of comfort with international travel. Economic instability at home may hinder certain markets more than others, but Asia still looks poised to lead these rankings for the foreseeable future.

Mexico was the quickest LATAM nation to bounce back post-pandemic, posting 80% year-over-year growth and cracking the list of top 10 international student populations in Canada for the first time since 2015.

Africa made a big contribution to Canada’s record-breaking year, mostly from an emerging markets standpoint. In 2021, seven of the top 30 countries ranked by number of students in Canada were African countries.

Nigeria comes in at ninth in the top 10 rankings, building on steady growth that’s caused it to blossom into an emerging market in Canadian international education. Let’s check out Nigeria’s growth since 2015:

Nigeria has historically been a country with low approval rates on study permit applications, which is often used to justify its modest YOY growth figures.

In 2021, 10 African countries posted a YOY growth rate above the global average of 17%.

Students are once again excited to pursue their educational dreams on Canadian soil. Not only are perennial top source markets expressing interest in Canadian institutions, but we’re also seeing a host of emerging markets return in droves.

With high immigration targets, the PGWPP, and a welcoming culture, Canada looks primed to surpass its pre-pandemic growth trajectory.

Canadian institutions and recruitment partners should take note of these region-specific trends as they bolster their recruitment efforts for 2022 and beyond. Here’s a few of our recommendations:

1. In this article, “international students in Canada” will refer to study permit holders with a valid permit as of December 31 of the given year. All data courtesy of Immigration, Refugees, and Citizenship Canada (IRCC), unless otherwise noted. More recent data not yet available.

47
SHARES
Share on WhatsappShare on FacebookShare on TwitterShare on Linkedin