Justin Trudeau Kicks Off Week of Celebration at ApplyBoard 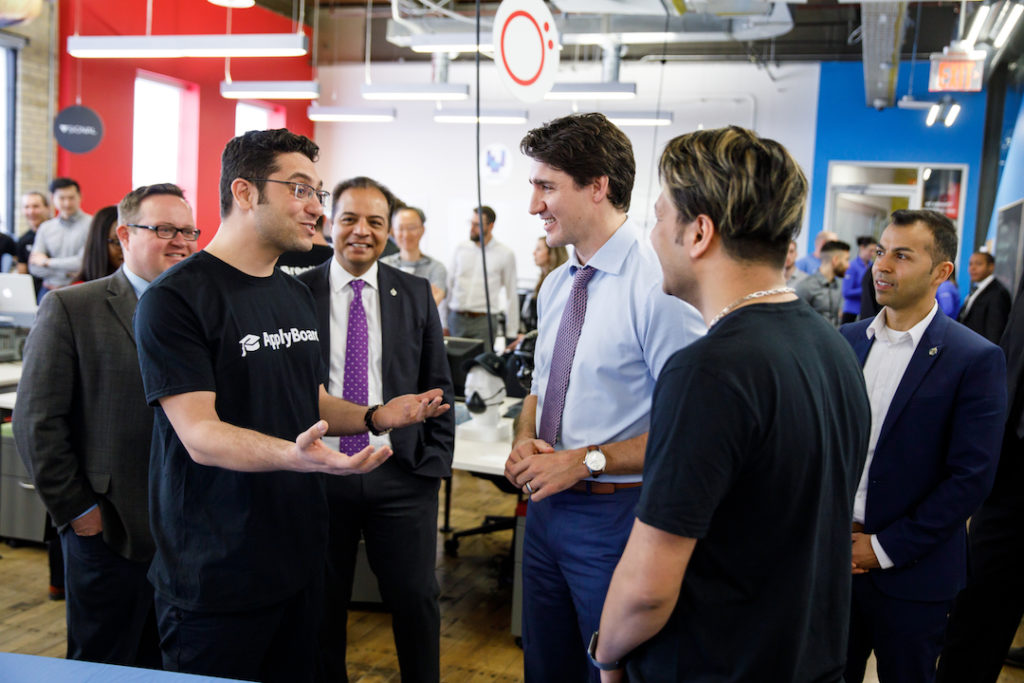 April has been an exciting month at ApplyBoard. Within the same week, we held a Grand Opening event, hosted Canada’s Minister of Immigration, and were invited to meet Prime Minister Justin Trudeau during a funding announcement at Communitech.

The week kicked off with ApplyBoard Co-Founders Martin and Meti Basiri attending Prime Minister Justin Trudeau’s visit to Waterloo Region’s major tech hub, Communitech. ApplyBoard was one of a handful of local companies invited to speak to Trudeau about their start-up growth experience.

Trudeau was on hand to announce a major federal funding initiative designed to help Canadian tech companies scale. In all, $52.4 million is being invested in the new Scale-Up Platform, which aims to help 30 firms in southern Ontario reach $100 million or more in annual revenues by 2024.

“Prime Minister Trudeau’s funding announcement is great news for our region,” said ApplyBoard’s Martin Basiri. “The Communitech network helped ApplyBoard immensely in our early stages and I am looking forward to seeing other organizations grow under the Scale-Up Platform.”

“We can’t afford to get complacent,” said Trudeau during his address. “Countries around the world are trying to earn a top spot in the new economy, and while Canadian innovators have given us a head start, we need to keep up the pace.”

This was Trudeau’s first visit to the region since his appearance at Hack the North in 2017. However, the Prime Minister wasn’t the only federal official visiting the region last week.

ApplyBoard was fortunate to host the Honourable Ahmed Hussen for a second time. The Minister of Immigration, Refugees and Citizenship, accompanied by Kitchener Centre Member of Parliament Raj Saini, visited our new office on Thursday, April 18, 2019. Hussen last met with ApplyBoard in October 2018 and he was greeted by a much larger crowd this time around.

“My good friend Raj Saini insisted I come back to ApplyBoard, but I didn’t know you had added so many people to your team,” said Mr. Hussen during his speech. “When people say ‘What does immigration do for Canada?’ this is the answer. It’s about innovation, it’s about growth, it’s about jobs. It’s about ambition for our country and our communities … and making sure we remain a welcoming country for international students.”

Sandwiched in-between these exciting events was our Grand Opening party, which saw 150+ many educators, tech-industry leaders, and government officials celebrate with ApplyBoard staff. To see more from our Grand Opening, including lots of pictures, check out our event recap here!

A Grand Opening party, visit from the Minister of Education, and a meeting with Justin Trudeau? Just another week in life at ApplyBoard!

Keep an eye on our blog for future event previews and recaps. Want to be part of the action? Consider joining our diverse team today! You can find all open job positions on our website.

5 Beautiful Places to Visit in Ontario This Spring