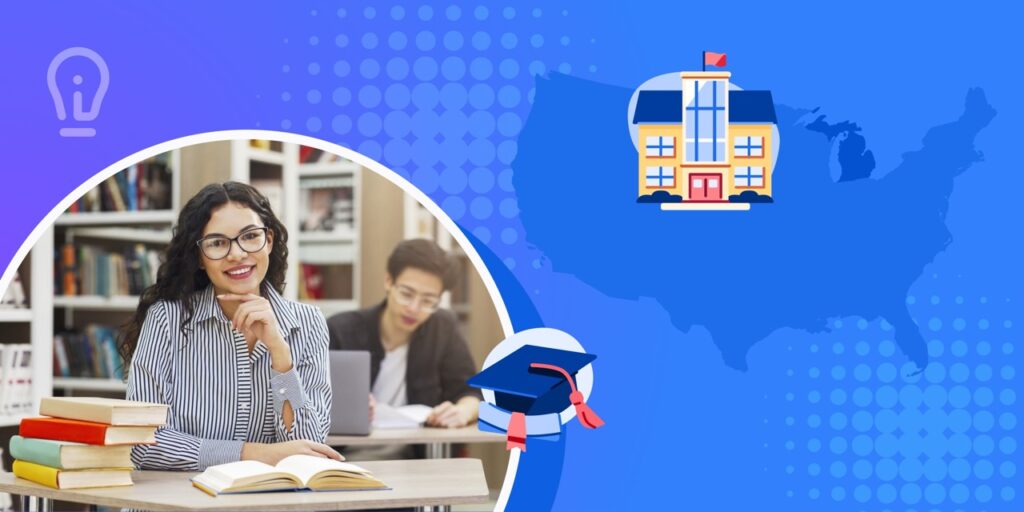 Michigan offers the sixth-lowest cost of living among all states, contains more freshwater access than any state in America, and is home to a top 20 school for international enrollment.

The Great Lake State has been a mainstay in the top 10 US state rankings for international enrollment over the past decade and was one of the least impacted states during the pandemic. As US application numbers continue to soar, we expect to see more international students calling Michigan their study abroad home.

This is the second article in our series exploring study trends in the most popular states in the US international education market. We previously covered California back in January.

The growth of international students studying in the US has slowed every year since 2014/15. And while it’s well documented that former President Trump’s rhetoric and policies and the COVID-19 pandemic deterred international students from visiting the US in recent years, 2022 looks poised to be a year of recovery for Michigan and the US.

The line graph below illustrates the steady decline of the international student population growth in both Michigan and the rest of the US since 2014/15, before a sharp drop in the 2020/21 academic year.

Michigan consistently saw a slightly larger decrease in YOY growth than the rest of the US pre-pandemic, but showed strong resilience in 2020/21, as growth dipped by nearly 3 percentage points less than the national average during that time.

Michigan was just one of nine states that saw its growth rate fall by 13 percentage points or less during the academic year in which the US felt the brunt of the pandemic.

This resistance to pandemic-related decline is likely a partial product of the low cost of living that Michigan offers.

The following scatterplot indicates the cost of living in every US state in 2021/22, factoring in housing, food, transportation, healthcare, and more:2

The Great Lake State offered the seventh-lowest cost of living during the 2020/21 academic year at 88.9, well below the national average of 104. Michigan also bolstered its case to prospective international students by being the most affordable state to live in out of the top 20 states ranked by international enrollment.

During a time where students are being particularly cautious about how they spend their money, choosing an affordable place to live that also offers some of the highest quality education in the US is a decision that makes a lot of sense.

Groceries are also cheaper in Michigan than in any other state in the US, news that should be music to the ears of many students.3

Beyond the appeal of cost savings, students looking for an authentic US college experience would find that Ann Arbor, the state’s sixth-largest city, is a bustling hub for over 60,000 students.

With an eclectic mix of different university cultures, Ann Arbor’s economy is shaped by the schools and students that reside there. A plethora of parks, markets, and the US’s largest football stadium make Ann Arbor a place where big-city sophistication is layered with small-town charm—a combination that students adore.

Since 2016/17, the top five source country student populations in Michigan have represented around 3% of all international students in the US, hosting just under 28,000 in 2020/21. The chart below breaks these down, with the option to toggle between academic years:

China, India, Canada, South Korea, and Saudi Arabia have remained Michigan’s top five markets since the 2016/17 academic year. Both China and India have held a consistent share of Michigan’s international student population over the past five years, ranking first and second respectively during that period.

Canadians accounted for 5.4% of all international students in Michigan during 2020/21, the highest percentage of any state in the US. The close proximity of Canada to Michigan makes it a prime target for recruitment offices all over the Great Lake State. A fair share of Canadians also come to Michigan to attend medical school, with Canada accounting for the highest proportion of health professions students of any source country in the US at 15%.

Top 10 Most Popular Institutions in Michigan for International Students

Which institutions are international students targeting in Michigan? Let’s look at the evolution of today’s top 10 rankings over as many years:

In 2012/13, Michigan State University (MSU) surpassed the University of Michigan (UM) to become the number one destination for international students for the following four years. In 2016/17, UM not only leapt back into first place, but continued on an upward growth trajectory while MSU and Michigan’s other top schools either plateaued or steadily declined until 2019/20, when all institutions saw a pandemic-related decline.

Western Michigan University, Wayne State University, and Michigan Technological University rounded out the top five. University of Michigan–Dearborn continues to be one of the most popular graduate schools for international students in the US, welcoming over 1,100 last year.

The international student population fell across the board for nearly all these institutions in 2020/21, with only Michigan Technological University (+24%) and Western Michigan University (+1%) experiencing an increase.

However, even accounting for 2020/21’s steep decline, seven of these schools remain up compared to the 2015/16 academic year, when Michigan’s growth began declining. The graphs below highlight each institution’s performance. You can toggle between both timeframes to spot the differences.

While Michigan doesn’t provide much in the way of bustling metropolitan areas for its students, it can offer them something even more attractive: quality education at an affordable price.

As the US dollar remains high and the majority of source markets continue to recover from the economic downturn caused by COVID-19, Michigan stands out as a place that can offer students an enriching college experience and a great opportunity at finding postgraduate work, all while not worrying about how they’re going to pay their bills.

Here are some ways schools in Michigan can usher in more international students:

1. All data courtesy of the Institute of International Education (IIE), Open Doors 2021, unless otherwise stated.

2. Cost of living is defined as the amount of money needed to sustain a certain standard of living by affording basic needs such as housing, food, healthcare, and more.