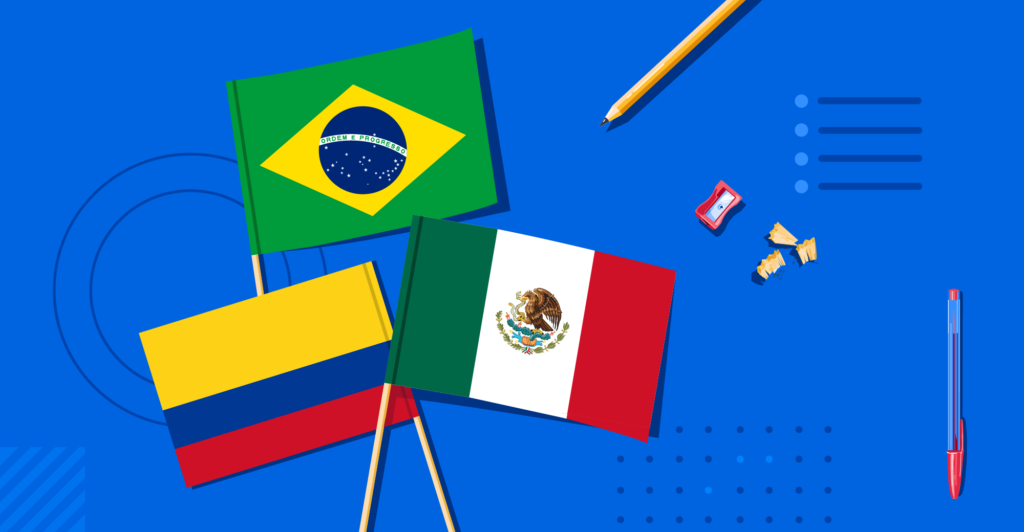 Definitions of what countries make up Latin America vary. In this blog post, I’ll use the term to refer to the countries of North America, Central America, South America, and the Caribbean whose residents predominantly speak the Romance languages of Spanish, French, and Portuguese.

The map below shows the 20 countries that fit this definition, and the number of study permits approved for students from each country in 2019:As the map shows, Brazil, Mexico, and Colombia are the dominant players in the LATAM market. Each country supplied more students to Canada in 2019 than the remaining 17 countries combined.

Let’s examine each of these leaders in LATAM enrollment more closely.

Brazil is the most populous country in Latin America, with more than 200 million people. It’s the top LATAM source of international students to Canada and the fifth-largest source country overall.

The chart below shows the growth in the Brazilian market from 2015 to 2019:Let’s look at application numbers first. 2016 and 2017 were years of strong growth for Brazil, with applications up 24.1% and 16.1% year-over-year, respectively. However, 2018 saw virtually no growth, and applications actually declined 6.1% in 2019. Net growth in study permit applications over the four-year period was 36.4%, below the average growth rate of 62.8% for Latin America.

What caused this sluggish growth, and now decline, in such a high-potential market? The past twelve years have been difficult economically for Brazil, which was hit in succession by the global financial crisis of 2008, its own domestic economic crisis in 2014, and now the fallout from the COVID-19 pandemic. The result has been a shrinking middle class and a weak currency.

The Brazilian real, which hit 66 cents per Canadian dollar in August 2008, currently trades at around 25 cents.2

From speaking with our recruitment partners in Brazil, I know interest in studying in Canada remains high among Brazilian students. But the country’s struggle to contain COVID-19, coupled with its pre-existing economic challenges, portend a long recovery for Brazil’s economy that will slow the rebound in the Brazilian student market for Canadian schools.

What are Brazilian students studying in Canada? Let’s compare the distribution of study permit holders in 2015 and 2019 by study level:A steady shift from university to college studies between 2015 and 2019 has made college the dominant market among Brazilian students in Canada. Many Brazilian students see studying abroad as the first step in their immigration journey. College provides a shorter, more affordable path to Canada’s Post-Graduation Work Permit Program (PGWPP), which in turn helps graduates qualify for permanent residency (PR).

The significant segment of primary and secondary students, largely unchanged between 2015 and 2019, reflects the large number of mature students coming to Canada from Brazil with families in tow. A decrease in English as a Second Language (ESL) program enrollment drove the decline in the Other Studies category, which also includes French as a Second Language (FSL) and certain Quebec-based training and vocational programs.

Mexico is the second-largest LATAM country by population, with almost 130 million people. It’s the number two source of Canadian students from Latin America and the eleventh-largest supplier of students to Canada overall.

The graph below shows the growth in the Mexican market from 2015 to 2019:The number of study permit applications from Mexican nationals grew roughly 13.5% year-over-year between 2015 and 2018, before slowing to 5.9% in 2019. Net growth in study permit applications over the four-year period was 55.2%, which outpaced Brazil but still lagged behind the average growth of 62.8% for LATAM countries.

The charts below show the distribution of study permit approvals by study level for Mexican students in 2015 and 2019:A remarkable 50% of all study permits approved for Mexican students in 2015 went to primary and secondary students, with secondary students alone accounting for 44.6% of the total. Secondary enrollment peaked in 2017 as many middle-class Mexican parents looked abroad for opportunities for their children to not only get a world-class education, but improve their English skills as well. However, the deployment of a number of International Baccalaureate (IB) programs at Mexican schools over the past few years has provided a strong alternative to secondary studies abroad.

Turning to higher education, the number of study permit approvals for Mexican students in Canadian college programs tripled between 2015 and 2019. This drove much of the growth in the Mexican student market in Canada. Approval numbers for the university market increased 48.8%, while Other Studies rose just 7.5% and actually lost market share.

Why the explosion in college studies? Like Brazilian students, Mexican students are strongly motivated by the immigration pathway, and many see college programs as a more affordable means of taking the first steps on that journey.

The third-most-populous country in Latin America, Colombia has a population of just under 50 million. It’s Latin America’s third-largest supplier of students to Canada and the twelfth-largest source country for international students in Canada overall.

The Colombian market exploded between 2015 and 2019, as the chart below shows:Study permit applications from Colombian nationals skyrocketed more than 210% from 2015 to 2019, and, pre-pandemic, showed no signs of slowing down, with year-over-year growth of 39.4% between 2018 and 2019.

Colombia has experienced an economic boom over the past decade, led by a strong resources sector and the fastest-growing information technology industry in the world. This has increased social mobility and grown the market for international education in Colombia considerably. The growth of the IB program in Colombia has also helped to position students to pursue post-secondary studies abroad.

The Colombian government responded promptly to the COVID-19 crisis, implementing proactive transmission mitigation measures and providing significant financial assistance for hard-hit businesses and sectors. While these factors, and Colombia’s underlying economic tailwinds, don’t ensure a quick rebound in the Colombian market post-COVID-19, I’m optimistic. Look for Colombia to surpass Mexico as the number two LATAM source market in the next two years and continue to expand its impact on international education in Canada going forward.

The charts below show the distribution of study permit approvals by study level in 2015 and 2019:The college sector led the way with incredible 590% growth, from just 163 students in 2015 to 1,125 in 2019. This allowed college to eat into the market share for the university sector, which grew just 28.9%. Study permit approvals for bachelor’s degree programs actually fell 7.4% over the period.

One thing our recruitment partners are hearing from their students is growing interest in language training programs offered at colleges and universities. These programs are convenient for students, as students can apply to them in conjunction with academic programs and transition from the language program to the academic program without needing to obtain a second letter of acceptance. With this in mind, I’ll be keeping an eye out for slower growth or even a decline in study permit numbers for Colombian students attending independent language training schools.

LATAM has long been a top target market for Canadian schools for a few reasons:

We can point to the growth in the college market as one product of these factors. But among the top three LATAM source countries for international students to Canada, only Colombia has really seen the growth the industry has envisioned over the past five years. As the two largest LATAM countries, Brazil and Mexico will remain markets of focus moving forward, but it’s unlikely we’ll see the kind of explosive growth schools are hoping for without real shifts in the economic situation in those countries.

While the remaining markets in Latin America are much smaller than these three, I know they’re on the radar for many schools as long-term growth opportunities. I’ll cover some interesting trends in these smaller countries in a future ApplyInsights.

1. All application and approval numbers for new permits only. Please note that students from many Latin American countries do not need a study permit to study in Canada for less than six months, and these students are not captured in the data. Data courtesy of Immigration, Refugees and Citizenship Canada (IRCC) unless otherwise noted.

3. Though even closer to Latin America than Canada, the US doesn’t offer the same pathway to permanent residency.

149
SHARES
Share on WhatsappShare on FacebookShare on TwitterShare on Linkedin