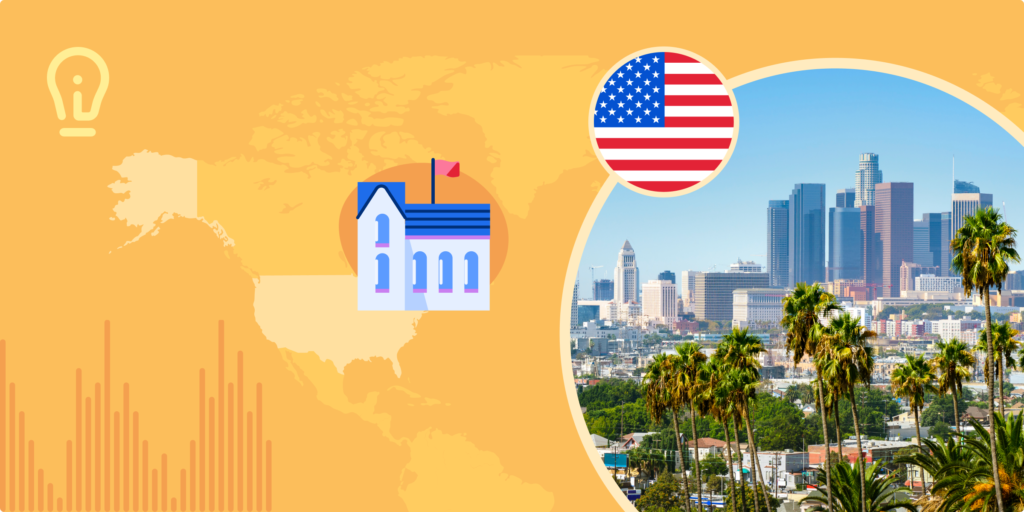 New data from the 2021 Open Doors Report on International Education Exchange indicates that students want to study in locations that provide them with an enriching cultural experience and access to strong job opportunities, in addition to a world-class education.

We mined the numbers to discover which US metropolitan areas are most popular among international students, explored what location-specific factors are driving students to these areas, and looked for trends within certain source markets.

Most Popular US Metropolitan Areas

We’re seeing a lot of familiar names at the top of these rankings. New York-Newark-Jersey City ranks number one. It hosted a total of 84,972 students in the 2020/21 academic year and accounted for over 9% of all international students in the US. Los Angeles-Long Beach-Anaheim and Boston-Cambridge-Newton rounded out the top three.

There are several factors that could cause an international student to enroll in an institution in Atlanta-Sandy Springs-Roswell, Georgia, over a university in Detroit, Michigan, despite there being 30% more selection in Detroit.

We know that students gravitate towards areas that offer a higher likelihood of them landing a job in their preferred field once they graduate. Data suggests that students’ focus on job opportunities is swelling larger each year. In the case of Atlanta-Sandy Springs-Roswell, jobs are a major driver of students to this area.

Atlanta-Sandy Springs-Roswell boasted the third-lowest unemployment rate of any metropolitan area in the US last year and is also home to a booming Fintech industry. An estimated 70% of all transactions on a global scale pass through companies headquartered in metro Atlanta,3 a statistic that’s surely piqued the interest of many international students pursuing a career in business.

A recent ApplyBoard blog post breaks down metropolitan areas with low unemployment rates that are the most attractive options for international students.

This brings us to another major factor influencing students’ selection process—field of study. Let’s take a look at the most popular fields of study among international students in the US last year:

Source: IIE/Open Doors
STEM and business programs were selected by seven of every 10 international students in the US in 2020/21. Naturally, students targeting either of those fields of study are more likely to explore institutions that specialize in them.

We see proof of this when looking at the data for Lafayette-West Lafayette, Indiana, which ranks 19th out of all metropolitan areas in terms of international students hosted, but has only one institution.

That sole institution is Purdue University, an ApplyBoard partner school, which was home to over 10,000 new international students in 2020/21. Purdue is known for its competitive engineering curriculum, which recently ranked third among all colleges and universities in the US.

Despite there being several institutions in larger metropolitan areas offering engineering programs, international students are much more keen to trust established and proven institutions for their preferred field of study.

We’ve seen the number of students studying in metropolitan areas steadily rise over the past 10 years.

The following graph tracks the population of international students in the top 10 metro areas since the 2011/12 academic year:

But the most interesting nugget of data here is that the proportion of international students pursuing education in metropolitan areas is also growing.

Let’s take a closer look at the mix of nationalities that compose these metropolitan student populations.

Breaking Down Places of Origin for the Top 15 Metropolitan Areas

While students from India, China, and South Korea consistently account for the majority of international students in the US’s largest metro areas, there were some interesting outliers in the data.

Click on the circles on the map below for a breakdown of the international student populations of the top 15 metropolitan areas in the US in 2020/21:

Nepal doesn’t show up on the top 10 lists of source countries for the other 14 largest metropolitan areas in the US, and it accounts for only 1.2% of the US’s international student population total. Yet, one in five Nepali students in the US last year studied in Dallas.

Students and their families naturally gravitate to locations that offer them the strongest sense of culture and community.

The reason for students from smaller source markets gravitating to one metropolitan area is familiarity. In the case of Dallas, it became the top area for Nepali and Nepal-born Bhutanese refugees to settle following the Bhutanese refugee crisis in the early 1990s.

Today, the Dallas area is home to the Nepali Cultural and Spiritual Center, a booming Nepali food scene, and the largest concentration of Nepali immigrants in the United States.

Other surprise names seen on the top 10 rankings of metropolitan areas include the amount of Vietnamese (10.4%) students in Houston, Texas; Saudi Arabia squeaking into the top three of Phoenix, Arizona and Washington, D.C.; and the unusually high number of students from Kuwait studying in San Diego.

The common denominator between all of these trends is an established, deep-rooted community living within these areas. Students from India, China, and South Korea can be fairly confident that there will be existing networks of their fellow citizens waiting for them in most large metropolitan areas in the US. Those from smaller markets need to select their study abroad destination more carefully if they want to have access to the familiar culture, food, and languages of home.

Institutions, take note. If you are based in an area that has a strong cultural representation of certain nationalities, use that information as a core component of the recruitment process for students from those countries.

When it comes to selecting where to study, the process looks a little different for each student. School reputation, post-graduate work opportunities, and cost of living are on nearly every student’s radar. As the US recovers from the global pandemic, impact of COVID-19 is being felt more by non-metropolitan areas, likely due to the fact that these places don’t have the same internationally recognized schools as their densely populated counterparts.

As the prospect of living and learning in metropolitan areas becomes more and more appealing to incoming international students, here are some key points US schools should factor into consideration as they work towards helping more students realize their dream of getting an education in the US:

1. All data courtesy of the Institute of International Education (IIE). Please note that the IIE changed its definition of international student this year to include students studying remotely from their home country. Previous editions of the report included only student visa holders.

2. Only institutions hosting a minimum of 10 international students were included in these rankings.