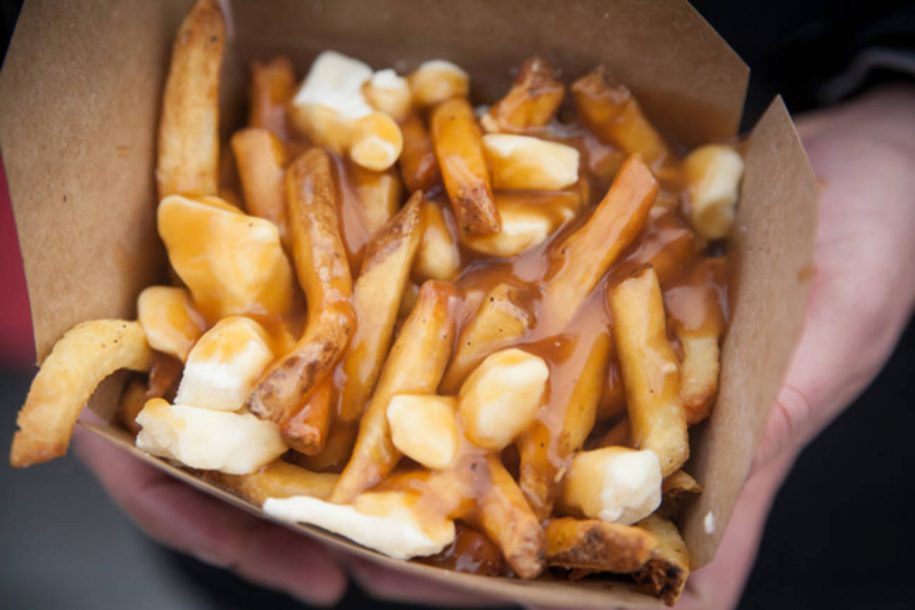 Whether you’re a new student in North America or have been studying in Canada or the United States for a few years, here are 5 must-try dishes that are a huge part of North American culture!

Composed of soft, doughy biscuits covered in your choice of gravy, the All-American dish is topped with drops of milk, flour, sausage, and other kinds of meat. Although some find it a little too heavy for breakfast, biscuits and gravy is popular because of its rich, savoury, and flavourful taste, and can be eaten at any time of the day.

To make your own American-style biscuits and gravy, try out this recipe!

Buffalo chicken wings were created in 1964 by Teressa and Frank Bellissimo at their restaurant, Anchor Bar in Buffalo, New York when their son and his college friends arrived at the restaurant for a late-night snack.

Faced with the problem of leftover chicken wing inventory, Teressa decided to toss the wings in cayenne hot sauce and served the very first dish of what soon became a North American classic. From Philadelphia’s Wing Bowl to the National Buffalo Wing Festival, Buffalo chicken wings have deeply ingrained themselves in North American cuisine.

To explore your own adventure of chicken and spice, check out this recipe!

Starting as a wholesome, sweet family recipe, and transforming into a corporation in 1978, BeaverTails became a multi-national company that instilled a little taste of Canada wherever it was sold with its renowned, “BeaverTail”.

A fried dough pastry, the BeaverTail is a sugary delight that is topped with your choice of fruits or sweets, such as bananas, whipped cream, crumbled Oreos, cinnamon, and much more. You can choose your adventure and customize your own BeaverTail! The best places to get a BeaverTail is in Montréal or Ottawa, where the dish is most popular.

Curious? Try the BeaverTail in the comfort of your own home! Follow this recipe and experience the best dessert you’ve ever had!

While its origin is highly contested among historians, the American hamburger is one of the most famous North American dishes in the world partly due to the globalization of popular foods. The hamburger is essentially a sandwich with one primary staple – a spices-and-herbs-infused patty encased by two hamburger buns.

From chicken to ground beef, the hamburger is another “choose your own adventure” dish that allows you to customize your sandwich with a wide variety of toppings such as pickles, tomatoes, lettuce, ketchup, cheese, and even potato chips! As an extremely flavourful and filling dish, the entrée can be found almost anywhere in the world – both in fast food and casual dining restaurants. The best hamburgers can be found where the chefs of the kitchen make the dish the most creatively – commonly in big cities like Toronto or New York.

Can’t wait to taste the wave of flavor? Make a hamburger with this recipe now!

Originating in rural Québec at snack bars during the 1950s, poutine has since become the dish that signifies the Canadian national identity. As simple as fries, cheese curds, and gravy, poutine has captured the hearts of every Canadian as it appears in almost every fast-food and casual dining restaurant in the country.

While many prefer the classic poutine, the dish comes in many forms. From the supreme poutine (nacho cheese, sour cream, gravy, cheese curds, tomatoes, fries, and green onions) to pulled pork poutine (pulled pork, barbecue sauce, gravy, cheese curds, and fries), like the hamburger and BeaverTail, poutine is perfectly customizable to suit your food loving needs! Search for quality poutine in Toronto or Montréal or poutine specific places called “poutineries”. This dish will not disappoint!

Can’t wait until you arrive in Canada? Try this recipe and experience the Great White North yourself!

All this food making you want to study in North America? Explore exciting schools and programs on ApplyBoard’s Platform today!

266
SHARES
Share on WhatsappShare on FacebookShare on TwitterShare on Linkedin