Ireland 101: Why Study in Ireland 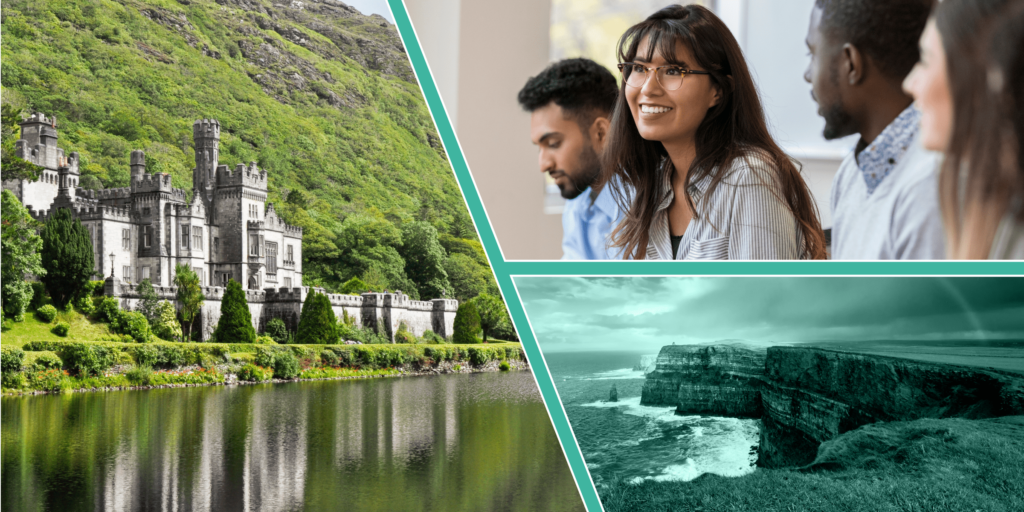 Ireland is a small island that offers enormous opportunities to its students. Continue reading to learn why Irish universities have the happiest students in all of Europe!

Courtesy of the U.S. Department of State.

The capital city of Ireland is Dublin, home to more than a quarter of the country’s total population.

The population of Ireland is over 5 million people based on the latest census of population data. As Ireland continues to grow, many people of different cultures and different backgrounds settle in Ireland, with visible minorities making up 12% of the country’s population—a percentage that has doubled over the first decade of the 21st century.

Many institutions have International Student Offices to support students adjusting to their new homes. Those studying in Ireland can expect to build lifelong friendships in student clubs, societies, and even recreational and competitive sports!

International students may now use the ApplyBoard Platform to submit their applications to five renowned Irish universities!

International students graduating from Irish universities have a high chance of finding employment. Ireland’s Graduate Outcomes Survey on the class of 2018 showed that 80% of Ireland’s international students were employed or about to start a job, and 66% of those students found employment in Ireland. This employment rate is on par with graduates from the UK in 2019 (78%), and higher than the US in 2017 (62%).

The Graduate Outcomes survey reports that the largest numbers of graduates were employed in professional, scientific, and technical sectors (19%), or information and communication (16%), followed by financial, insurance, and real estate (14%).

These findings show strong demand for skilled professionals graduating from Ireland’s higher education institutions. International students will benefit from these opportunities as Ireland grows into its role as Europe’s STEM and technology hub.

“There is clearly a demand in Ireland for the high quality graduates that are coming out from our higher education institutions. It is also noteworthy that over two thirds of non-Irish graduates who go into employment choose to remain in Ireland. Skilled graduates are going to continue to be essential for our talent driven economy and to help meet societal challenges.” —Paul O’Toole, Former Chief Executive, Higher Education Authority (HEA).

International students who study in Ireland are eligible to work up to 20 hours per week during their study term. In order to qualify, you must be enrolled in an educational institution full-time in a course of study at least one year in duration. International students with a valid immigration Stamp 2 are also allowed to work up to 40 hours per week from June through September, and over the winter break!

For eligibility criteria and the latest updates, please visit the Department of Justice website.

To calculate the cost of living, consider your individual circumstances and needs. Look at the type of housing, your lifestyle, whether you’ll be working part-time, and where in Ireland you’ll be studying.

Generally speaking, students can expect to spend between €7,000 to €12,000 per year while studying in Ireland. Technological University Dublin has produced a 2022 and 2023 Cost of Living Guide that looks specifically at studying and living in Dublin. Dublin’s cost of living is similar to other large cosmopolitan cities—in comparison, living in smaller Irish cities or towns is considerably less expensive. Do your research early to figure out what city is best suited for you!

The small island of Ireland packs a serious punch when it comes to breathtaking landscapes! Ireland is known for its charming, green hills that spread as far as the eye can see, as well as impressive cliffs and rocky formations along the ocean. The Wicklow Mountains, located just outside of Dublin, offer breathtaking views along with hiking and rock climbing opportunities in the country’s longest continuous upland area.

The people of Ireland are known for being warm and welcoming. Irish folklore, traditional dancing, and Celtic festivals are all a part of what makes this country its own! Ireland is filled with local traditions you can learn about and enjoy, and there are countless opportunities to experience what it means to call Ireland home.

Any student opting to study abroad in Ireland will not only receive a world-class education, but also a once-in-a-lifetime experience.

What are you waiting for? Start exploring your options to study in Ireland on ApplyBoard!

25
SHARES
Share on WhatsappShare on FacebookShare on TwitterShare on Linkedin

How Studying Abroad Can Boost Your Resume