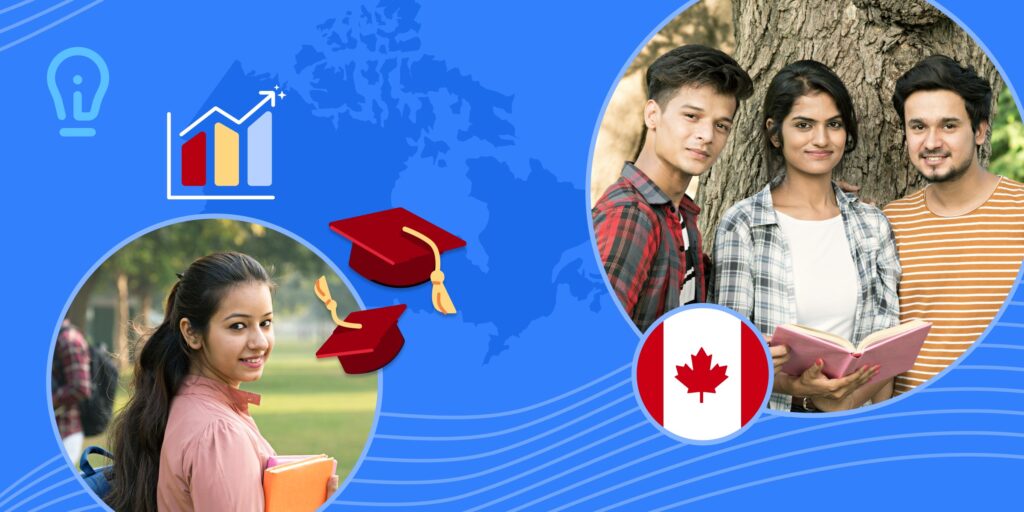 A couple of weeks ago, we answered the question, “Where in Canada did 2021’s record number of incoming international students choose to study?” We looked at how student mobility trends have shifted over the years, highlighted growing metro areas, and unpacked patterns that will dictate the future of international student distribution in Canada.

Today, we’re undertaking a similar investigation for India. Canada’s largest source market was the star of an early IRCC data release, which showed India is primed for yet another record-breaking year for study permit approvals in 2022.1 Where these students settle will have a significant impact on the state of international education in Canada for years to come.

The big take-home message from our all-markets analysis was that international students are gradually moving away from Canada’s most densely populated cities (Toronto, Vancouver, Montréal) and gravitating toward small and medium-sized metro areas to study. But does that hold true for Indian students?

The following two-part graph compares and contrasts the distribution of students from all markets vs. Indian students:

Indian students are widely distributed across Canada. If you zoom in on both maps, you’ll notice that the yellow circles in the all-markets map, representing the top 10 metro areas, are much larger than the blue circles representing metro areas 11 through 50. On the Indian map, the contrast between the sizes of the yellow and blue circles isn’t nearly as stark.

The market share of non-Indian international students living outside of Toronto, Vancouver, and Montréal increased from 58% in 2016 to 62% in 2021. The distribution of Indian students is significantly wider.

In 2016, 60% of all Indian students were based outside of Toronto, Vancouver or Montréal. This figure increased to 68% in 2021. This tells us that Indian students are displaying a greater willingness to study and live in emerging metro areas than any other group of students in Canada.

30 of the 50 most popular metropolitan areas among Indian students were located in Ontario, compared to 23 among students from all markets.

This gravitation toward less established metro areas by Indian students could prove to be a pivotal driver of the expansion of international education across Canada over the next few years. But that’s not the only mobility trend that Indian students are helping us predict.

The Trend-Setting Power of Indian Interest

Historical data tells us that Indian students have the power to predict destination and mobility trends across Canada.

Let’s take a look at the top 10 metro areas for Indian students in 2021 compared to students from all markets:

Seven of the 10 cities on each rankings list overlap. The newcomers to this list include Brampton, ON; Surrey, BC; and Barrie, ON. It’s no shock these lists don’t match up perfectly. But these three metro areas share one specific characteristic—none of them are close to being ranked inside the all-markets top 10 list.

Among students from all markets, Brampton ranks 14th, Surrey ranks 18th, and Barrie ranks 22nd. Indian students are keen to study in these metro areas, but students from other markets don’t share the same level of interest. At least, not yet.

Looking back at the top 10 from 2016, once again seven of the all-market top 10 destinations overlap with the Indian top 10:

When it comes to predicting which Canadian metro areas will grow in popularity, interest from Indian students seems to be the leading indicator of future trends. Once Indian students begin targeting a given metro area in Canada, there’s a high likelihood that the area is going to experience major growth within the next five years.

This finding makes a lot of sense given that Canadian institutions will often begin international recruitment by targeting Indian students, before expanding their diversity efforts to other markets.

Institutions based within commuting distance of Brampton, Barrie, and Surrey should anticipate that interest from international students will snowball over the coming years, and should work to ensure their programs and infrastructure can handle increased demand.

Indian Growth Across the Country

Study permit applications have been pouring in from Indian students all across the country, a function of their rising interest over the past five years.

The biggest beneficiaries of this interest are the schools based in metro areas that have experienced the highest levels of growth. Have a look at the top 10 fastest-growing metro areas in Canada among Indian students since 2016:

When we broke down high-growth areas for all markets, it was very Ontario-heavy. Eight of the top 10 metro areas were based in Canada’s most populous province. Indian-led growth is much more evenly distributed across Canada. With seven different provinces appearing on this list, it’s clear that Indian students are excited to study in all corners of the country.

The most eye-popping growth comes from Moncton, NB, which didn’t house a single Indian student in 2016 but welcomed 500 in 2021. One in every four study permits issued to international students in Moncton during 2021 was to an Indian national.

NBCC, Crandall University, and McKenzie College are all ApplyBoard partner schools based in Moncton that are helping to drive this growth.

Look for this growth to continue as Indian communities begin to establish themselves in Moncton, something that will only make New Brunswick’s largest city even more attractive in the eyes of prospective Indian students.

Small-town Sydney, NS, and Saskatoon, SK, are also showing significant growth, as both have vaulted up the rankings for Indian students.

Every other metro area on this list has seen between five and 11 times the number of Indian students in 2021 than it did in 2016. This is excellent news for institutions based in these areas, which have played a pivotal role in drawing Indian students onshore.

The sheer volume of Indian students makes them an integral part of the future of international education in Canada. More specifically, it makes them trendsetters.

When Indian students pursue studies in new metro areas, they’re likely to attract fellow citizens to that area. Also, that growth spills over to other markets. As the number of Indian students in Canada rises each year, the power for this group to spark widespread interest in smaller metro areas should only grow.

For Canadian schools looking to take advantage of these findings, here are our recommendations:

1. All data courtesy of Immigration, Refugees and Citizenship Canada (IRCC), unless otherwise stated.