This week on ApplyInsights I’ll be sharing observations on the South Asian country of India. India is the seventh-largest country by land, and the second-most populous country in the world. India has also been the largest source of international students studying in Canada for the last four years. Canada has received over 100,000 student visa applications from Indian students since 2017.

India holds the top position for being the largest source market for Canada in the last 4 years. The influx of Indian student applications has been over 100,000 since 2017. 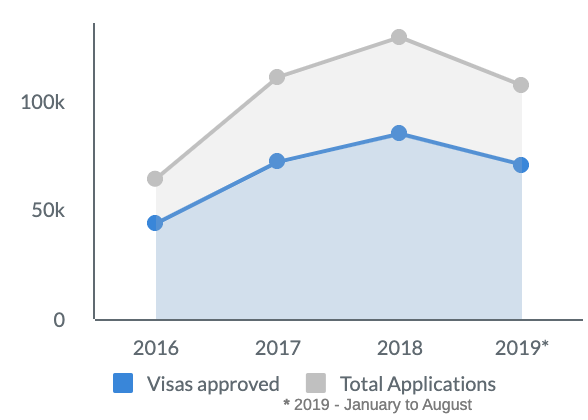 Student visa applications from India continued to grow rapidly in 2019, with 107,019 applications received by the end of August. I’ve included an image to show the total number of applications and visa approvals for Indian students over the last four years.

While Canada saw a slight decrease in applications from India—from January to August 2019, Canada received 107,019 applications—70,743 visas were approved, resulting in a 0.38% increase over 2018.

Since 2019, opportunities to start education early have increased for Indian applicants. Primary and secondary education have seen a considerable increase of 81% in visa acceptance. However, ESL/FSL study levels saw a dip from 2018, with only a 4% acceptance rate. Here, you can see 2019’s current program acceptance rates compared to 2018. 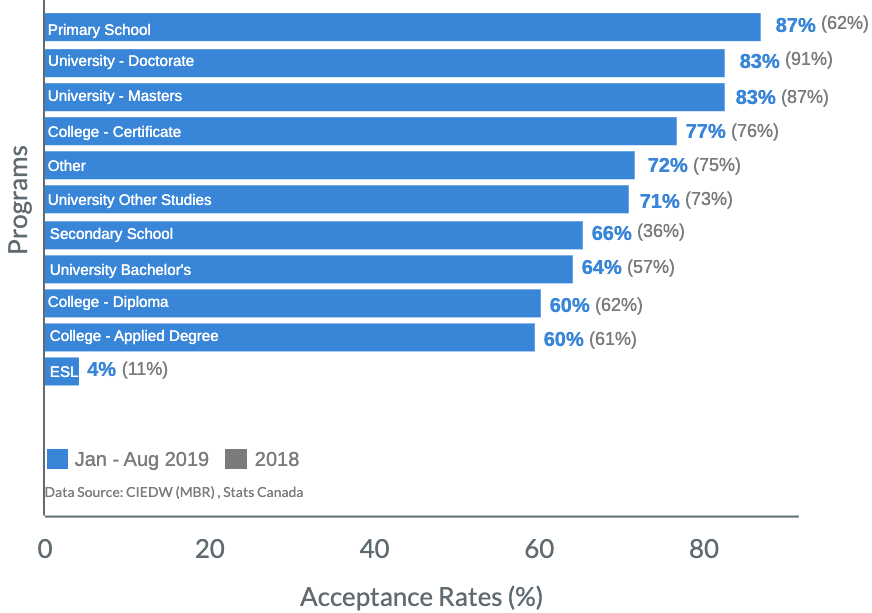 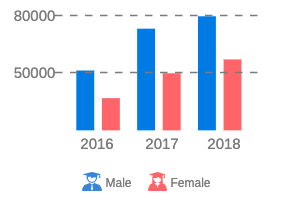 Canada continues to see more male applicants than female, although the acceptance percentage is higher for female applicants. This chart shows the total Indian applicants over the last three years, broken down by gender.

The Future of Indian Students

Canada continues to be the most popular study abroad destination for Indian students. According to an article published by ICEF, India continues to be a major influence in Canada’s international education sector.

The number of Indian students grew by another 40% in 2018, for a total overall growth of almost 350% since 2014. This amounts to more than 172,600 Indian students in Canada last year, a benchmark that means India will now surpass China as the leading sending market for Canada.

The only question we have to ask ourselves is, how sustainable this growth has been? Will Canada continue seeing the same growth in the next 3-5 years?

Meti Basiri
Co-Founder and Chief Marketing Officer (CMO)
Meti is driven by the belief that education is a right and not a privilege, he leads the International Recruitment, Partner Relations, and Marketing Teams at ApplyBoard to make education accessible to people around the world. Meti has been instrumental in building partnerships with 1,200+ educational institutions across North America. Working with over 3,500 international recruitment partners, the company has assisted over 80,000 students in their study abroad journey.